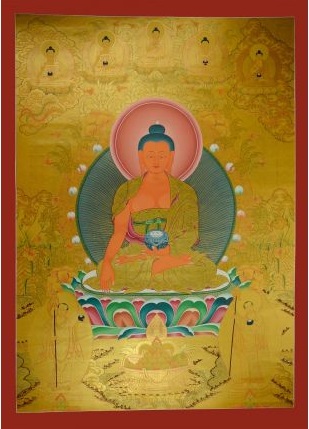 Shakyamuni Buddha - The Awakened One

Shakyamuni Buddha was born more than 2500 years ago in Lumbini, Nepal. He was called Siddhartha Gautama by his father, King Suddhodana, and mother, Queen Mayadevi. At the age of 29, he renounced the luxury of his royal heritage to take up the life of a religious wanderer. He submitted himself to rigorous ascetic practices, putting forth a superhuman struggle for six strenuous years. At the age of 35, he realized that the path to enlightenment was not to be found in the extremes of ascetic practice, and he went alone into the forest to meditate deeply on the true nature of reality, vowing not to return until he achieved his goal.

Through his unwavering determination, his meditations yielded profound insight into the truth underlying all existence (the Dharma), and he attained complete enlightenment. For the remainder of his life, living as the perfect embodiment of all the virtues he preached, the Buddha traveled widely teaching the Dharma. He offered his teachings to men, women, and children from all walks of life, so that they too could end suffering and attain awakening.

The Buddha Shakyamuni, at the moment of enlightenment, invoked the earth as witness, touching the fingers of his right hand to the ground in Bhumisparshana Mudra. According to the Sutras, the sun and moon stood still, and all the creatures of the world came to offer obesiance to the Supreme One who had broken through the bonds of ignorance. Images of the Buddha in this "earth-touching posture" celebrate this supreme moment of victory. The image should be interpreted as depicting the very essence of awakening, as the Buddha said, "Don't look at me, but to the enlightened state."

The Buddha is depicted with his right hand extended to the earth in the Bhumispara Mudra, the gesture of witness. He is "calling the earth to witness" his supreme victory over the temptations and illusions of the material world as symbolized by the demon Mara. His left hand lies in his lap with palm upward in the gesture of meditation ( Dhyana Mudra ). In some representations he also holds the begging bowl of an ordained Buddhist monk. The bowl contains three precious nectars indicating that he has conquered the three demons of uncontrolled death, contaminated aggregates, and delusion. Thus this posture is known as "Buddha Shakyamuni Conquering the Demons" and shows the moment of the Buddha's full enlightenment under the Bodhi tree.