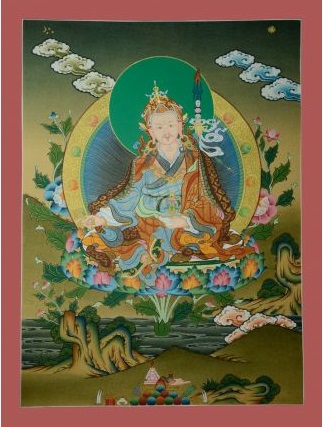 Buddhism was first introduced to Tibet in the eighth century when King Trisong Detsen invited the Indian master Santaraksita to teach the sacred Dharma to the Tibetan people. When Santaraksita arrived and he and the king began to build the first monastery, resentful mountain spirits interfered and created many obstacles. Realizing that the help of a realized master with control over physical reality was needed, the king invited Guru Padmasambhavato come and tame the angry spirits of Tibet.

Guru Padmasambhava, regarded as an emanation of Buddha Amitabha, was born miraculously from a lotus blossom in the land of Oddiyana located in present-day Pakistan. He was known far and wide for his miracle powers, including his ability to subdue spirits. At the request of the king, Guru Padmasambhavajourneyed to Tibet and engaged the local nature spirits in magical combat. Conquering these spirits, he bound them by oath to protect the Dharma for all time. Evidence of his victories in these battles can still be seen throughout the valleys and villages of Tibet, where he is affectionately known as "Guru Rinpoche," meaning "Precious Master."

The King, Santaraksita and Guru Padmasambhavathen worked together to establish Buddhism in the country. The King founded temples and Santaraksita ordained monks, while Guru Padmasambhavaworked at a more mysterious level. Guru Padmasambhavaestablished the secret and powerful practices of Tantric Buddhism, and gave profound and extraordinary teachings to his closest disciples, including the king. In addition, foreseeing that a future king would one day try to destroy Tibetan Buddhism, Guru Padmasambhavaconcealed religious treasures throughout the Himalayan region. These treasures would be revealed centuries later by seers destined to receive them.

Guru Padmasambhavadid not die, but flew away with his consort on the rays of the sun. It is belived by many, especially those within the Nyingma school (which traces its lineage directly to Guru Rinpoche), that he is still living, and remains full of compassion for sentient beings. Dwelling at the level of spontaneous presence, the great Guru has the power to bestow blessings instantly and grant wishes immediately. He remains to this day the deeply beloved focus of practice for many Tibetan Buddhists.

Here, Guru Padmasambhava can be seen in his most well known representation. His eyes are open in a piercing gaze; his face is wrathful and smiling, blazing magnificently with mysterious power. He cradles a khatvanga in his left arm, representing his consort Mandarava, who arouses realization of emptiness. His khatvanga is crowned with three severed heads and a trident, symbolizing Guru Rinpoche's liberation from the three kayas of desire, form and formlessness.

He wears a lotus hat ornamented with a sun and moon, representing skillful means and wisdom. His hat also has a vajra top, symbolizing his unshakable samadhi, and is crowned with a vulture feather, representing his realization of the highest view. In his right hand he holds a vajra, an implement used in Tantric ritual to symbolize the union of conventional and ultimate truth. His left hand rests in his lap in the gesture of meditation (Dhyana Mudra) and holds a skull cup containing the vase of immortality. The vase is filled with the nectar of deathless wisdom and is adorned with leaves of a sacred flowering tree. The vase further serves as a reminder of Guru Rinpoche's connection to Buddha Amitabha, as it is the special emblem of Amitayus (an aspect of Amitabha).