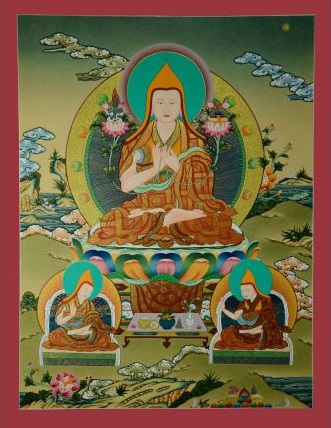 Tsongkhapa – The Founder of Gelukpa School

Tsongkhapa is the founder of the Gelukpa School and is the central figure in their Refuge Tree. Tsongkhapa is dressed as a monk and wears the yellow pandita hat this lineage has become associated with. After studying with a reported forty five masters, he founded the Gelukpa School in 1409 that emphasized monastic discipline. One of his students, Gedundrup was retrospectively recognized as the first Dalai Lama, an emanation of Avalokitesvara. The fifth Dalai Lama consolidated Tibet politically and spiritually and became its leader. Tsongkhapa is an emanation of Manjushri and he is often depicted with Shakyamuni Buddha in his heart. The Gelukpa Order has the greatest number of adherents of any of the lineages.